Definition: Percent of adults having diabetes, excluding females told only during pregnancy and pre-diabetes or borderline diabetes.

Importance
Diabetes can have a harmful effect on most of the organ systems in the human body; it is a frequent cause of end-stage renal disease, non-traumatic lower-extremity amputation, and a leading cause of blindness among working age adults. Persons with diabetes are also at increased risk for ischemic heart disease, neuropathy and stroke.

Where We Are
In 2013, 5.4% of adults reported having diabetes. The percent in Douglas County was lower than the State of Kansas and the U.S. in 2013.

Health Disparities
Among adults in Kansas in 2013: As age increases, the percent of those with diabetes increases.

Additional Information
Effective therapy can prevent or delay diabetic complications. However, almost 25 percent of Americans with diabetes are undiagnosed, and another 57 million Americans have blood glucose levels that greatly increase their risk of developing diabetes in the next several years. Few people receive effective preventative care, which makes diabetes an immense and complex public health challenge. 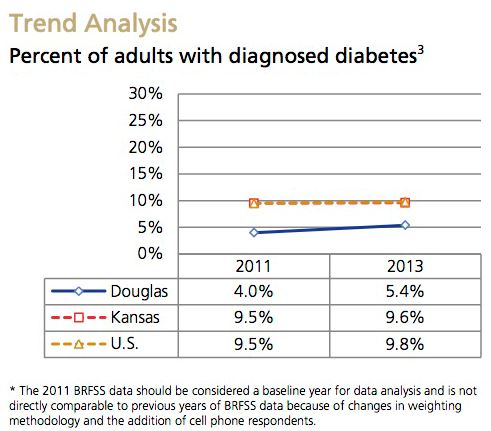 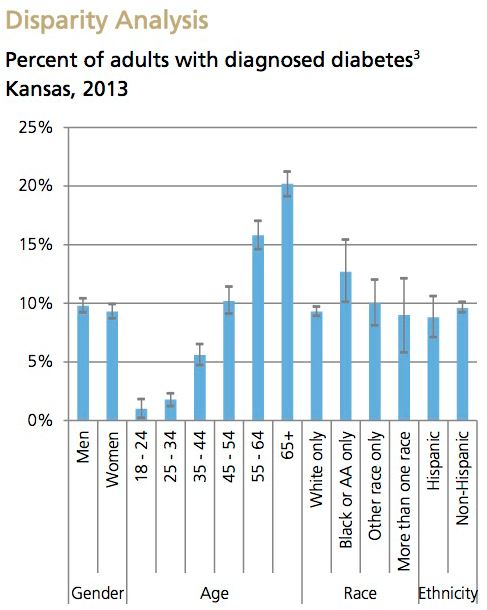