Definition: Percent of adults who reported they ever had a heart attack, also called a myocardial infarction.

Importance
A heart attack occurs when a section of the heart muscle dies or gets damaged because of reduced blood supply. Coronary Artery Disease (CAD) is the main cause of heart attack. A less common cause is a severe spasm of a coronary artery, which also can prevent blood supply from reaching the heart.

Where We Are
In 2013, 1.5% of adults in Douglas County reported ever having a heart attack. Douglas County had a lower percent than the State of Kansas and the U.S. in 2013.

Health Disparities
Among adults in Douglas County in 2013:
Healthy People 2020 Goal
Not available.

Additional Information
In 2008, more than 616,000 people died of heart disease. Heart disease caused almost 25% of deaths - almost one in every 4 - in the United States.

Major risk factors for a heart attack that you can control include smoking, overweight and obesity, high blood pressure, high cholesterol, diabetes, an unhealthy diet, and lack of physical activity. Risk factors that you can’t control include a family history of early heart disease and increasing age. Talk to your health care provider to find out whether you are at risk. 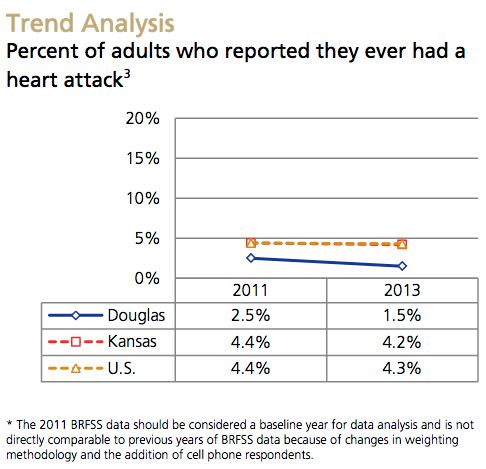 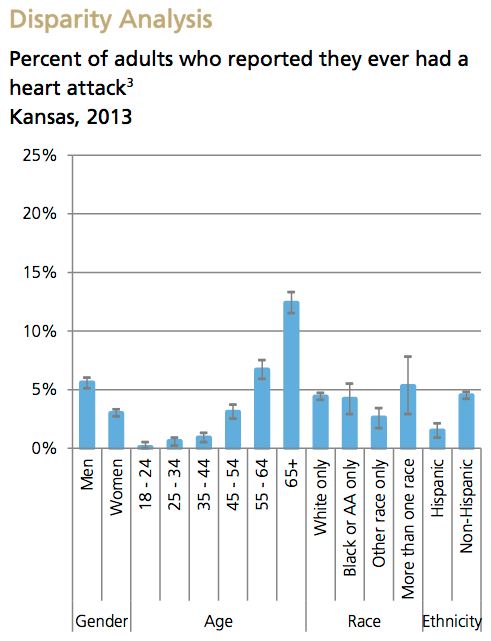